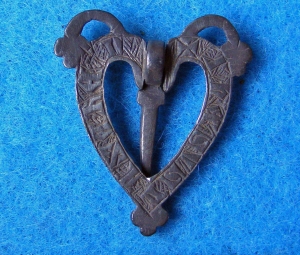 This heart-shaped silver brooch lay underground in Fife for hundreds of years until 2012 when it was discovered by a metal detectorist who reported the find to the Treasure Trove Unit. Under Scots Law objects whose original owner is unknown become the property of the Crown. For archaeological finds this law is used to ensure that finds of cultural significance are allocated to museums for public benefit. The finder is eligible for an ex gratia reward to recognise their contribution. Experts at the Treasure Trove Unit identified the brooch as a medieval love token, perhaps given by a husband to his wife. The reverse is inscribed ‘+ihesus nazren’, an abbreviation of the inscription ‘IHESUS NAZARENUS REX IUDEORUM’ which was often inscribed on jewellery in the belief that it would protect the wearer from harm.

Similar brooches dating from the 15th century have been found but this brooch is unusual in dating from the previous century. Brooches of this type are decorated with floral designs and engraved on the back. Examples from the 15th century have French inscriptions but this example has Lombardic lettering. The style of the brooch pin is similar to others from this date with a bar and collar resembling the hilt of a sword.

In 2013 the brooch was claimed as Treasure Trove and offered to museums in Scotland for their collections. Fife Cultural Trust made a successful bid and the brooch was added to the collections with the help of a grant from the NFA. It is now on display in Moments in Time, the local history exhibition at Kirkcaldy Galleries which opened in June 2013.

Today the tales of King Arthur and his knights of the round table are as popular as ever. Stories full of kings and battles for honour, such as Game of Thrones, continue to attract huge audiences; but it is when you actually see or, if you are very lucky, handle genuine pieces of heraldry that the reality of such tales is realised. 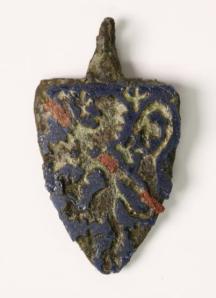 Thanks to the NFA just such a piece of heraldic history can be seen on display at Dumfries Museum. This copper alloy and enamel pendant, discovered in Kirkconnel near New Abbey, Dumfries, has been dated to the 14th century. The shield-shaped pendant bears a lion rampant on a blue field with a red bend. Despite its age the design and the vibrant colours are still clearly visible. Pendants with armorial bearings were attached to horse gear and used by owners and their retainers as a form of identification. Research carried out by the Treasure Trove Unit did not reveal which family the arms belonged to which may suggest they belonged to an English family. 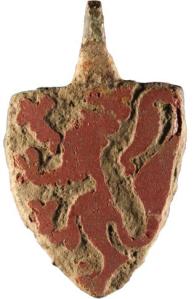 Medieval harness pendant found in the parish of Dalry

Dumfries and Galloway is very fortunate because the region houses more than one example of this type of pendant; the Stewartry Museum in Kirkcudbright has a similar one. Found in the parish of Dalry and dated to c1300 AD, this bronze pendant is also from a horse’s harness and is decorated with a lion rampant. Again no one has yet been able to definitively identify it but it may have belonged to a member of a local lord’s retinue.

Who owned these arms may be the key to unlocking their stories but until we can discover this the imagination is given license to fill in the gaps. It may be that these objects have been part of tales of chivalry, pilgrimage, tournaments or battles. Of course it might be that they have seen a life far less thrilling, but the most exciting thing about these pendants is that they give us some insight into the medieval world of arms and heraldry. They are examples of the colour and pomp that surrounded wealthy families during the medieval period, thereby making this time just slightly more accessible to us in the 21st century. And finally, perhaps the mystery currently surrounding them adds to their worth as museum artefacts, because just now they are full of possibilities.