Manuscript poem, A Sonnet upon Sonnets, by Robert Burns acquired by the Robert Burns Birthplace Museum in 1981 with an NFA grant of £750

Handling a museum object is a magical thing. To feel the smooth surface of an 18th century horn cup and imagine all the clasped hands that have done the same before you or to feel the coarse fibres of a horse-hair whisk. These are the sensory experiences that can bring history to life. Cherished, abused, appreciated or ignored; the object you handle is part of the human story that we find endlessly fascinating.

I was lucky enough to hold an original manuscript of Robert Burns’ A Sonnet Upon Sonnets very recently and I will not soon forget the experience. Acquired with help from the National Fund for Acquisitions, it has been in the care of the museum since 1981. Looking at that carefully preserved manuscript, I felt myself drawn down a multitude of avenues of imagination beyond the ‘fourteen good measur’d verses’. Where was Burns when he wrote this? Head bent over his writing desk? Perhaps ensconced in a cosy inn after a hard day’s Excise duties? Did his hand slip and make that tiny smudge? I found myself wondering what inspired this outpouring of poetic playfulness.

‘A Sonnet Upon Sonnets’ by Robert Burns

Written in 1788 – the year Burns married Jean Armour, two years after the Kilmarnock Edition had been published and the year in which he leased Ellisland Farm in Dumfries – the poem is an interesting departure from Burns’ usual style. His poems are not normally restricted in their length but he embraced the poetic convention of the sonnet wholeheartedly, playing with the genre seemingly for his own amusement. This was his first attempt at writing a sonnet and the result is a pleasing offering. Despite his fragmentary formal education, his passion for knowledge meant Burns had the capacity to play with poetry as he wished; a skill which only increased throughout his life. 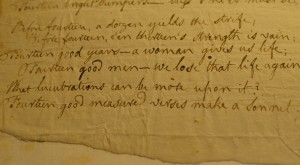 A detail of the manuscript

Two hundred and twenty six years ago Robert Burns held this page and his quill scratched its way across its surface, each flourishing ‘f’ placed with care as inspiration flowed. It is remarkable that there is nothing crossed out and there are few, if any, mistakes. It is so tempting to try to read into the loops and bold strokes of his recognisable handwriting in an attempt to discover what made him tick. There is a confidence in the flamboyant strokes that seems to fit with Burns’ reputation as never one to shy away from speaking his mind and there is a precise assertiveness throughout.

There are certain things about museums that make them special places and keep people coming back for more. To get up close and personal with an original Burns poem is surely one of them.

Thanks to the National Fund for Acquisitions, we have been able to secure many objects for the Robert Burns Birthplace Museum – from original manuscripts to contemporary art. They cover many aspects of Burns’s colourful life and legacy – from publishing success to personal scandal.

Oil painting, The Burns Monument on the Banks of the Doon, 1839, by Patrick C Auld

However, there is one rather under-stated landscape worth a mention. Burns Monument on the Banks of the Doon by Patrick C Auld was painted in 1839 but captures everything that today makes the museum such a magical place. In the background is Burns Cottage – already well-established as a place of pilgrimage (the world’s first Burns Supper was held there in 1801); poking out of the trees is the ruined bell-tower of Alloway’s Auld haunted Kirk where Tam o’ Shanter famously disturbed a satanic orgy; in the foreground, the Brig o’ Doon, over which Tam raced for dear life to escape Alloway’s witches (depicted in another NFA-funded acquisition by James Drummond); centre-stage Burns Monument, opened in 1823 with an exhibition of Burns manuscripts and related artworks – making it one of the world’s earliest literary museums.

Oil painting, ‘Tam Pursu’d by the Witches’ by James Drummond

In this simple painting, the enduring appeal of the museum is encapsulated. What is now the most extensive and important collection of Burns manuscripts does not rest in an academic institution or metropolitan archive but in the heart of the countryside that shaped it. A visit to the museum should never be a cold and intellectual experience. It should be immersive – just as Keats wrote, describing his 1814 visit to Burns Cottage:

Yet can I stamp my foot upon thy floor,
Yet can I ope thy window-sash to find
The meadow thou hast tramped o’er and o’er,–
Yet can I think of thee till thought is blind,–
Yet can I gulp a bumper to thy name,–
O smile among the shades, for this is fame!