Seventeenth-century gold posy ring found at Cullen, Moray, acquired by University of Aberdeen Museums in 2012 with an NFA grant of £375 (ex gratia award £750).

The story of this ring begins with its rediscovery in the Moray area. It was reported to the Treasure Trove Unit which ensures that finds of cultural significance are allocated to museums for public benefit. Experts identified the ring as a mid-17th century ‘posy’ ring of a type usually given as a wedding ring. 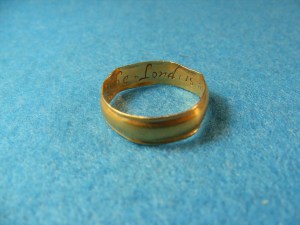 Although wedding rings were used much earlier, it was in the 17th century that their design began to make them visually different from other rings with a simple yet elegant gold band being a clear sign that the wearer was married. The inside of the ‘posy’ ring is inscribed with the phrase ‘The Lord is my helper’, a pious biblical reference from the King James version, Hebrews 13:6. The ring itself has a plain surface with a fluted edge which together with the inscription demonstrate the work of a skilled maker. The unusual style of the italic inscription dates it to the mid-17th century.

The ring fits with the University of Aberdeen’s collecting remit for Scottish archaeology in the North-East of Scotland and policy of collecting medieval to modern material relating to the traditional culture of Northern Scotland. The ring’s religious and social context makes it an ideal candidate for displays on life in the north-east.