Sentinel steam waggon acquired by Grampian Transport Museum in 2000 with an NFA grant of £15,200.

Sentinel steam waggon on the road

When I worked at the Bass Museum of Brewing in Burton On Trent, one of the key vehicle exhibits was one of three Daimler Worthington White Shield bottle cars, advertising vehicles built in 1923 in the shape of a bottle. In my present post at the Grampian Transport Museum I managed to borrow one of the other two from Beaulieu. It was like welcoming back an old friend and I wondered if GTM could ever aspire to the jewel in the Bass Museum’s vehicle fleet at that time, a 1917 Standard Sentinel steam waggon. 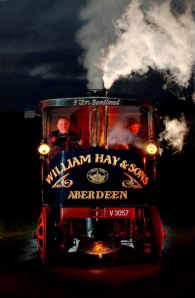 It was a strange coincidence that about a week after receiving the bottle car we were tipped off about a very early Sentinel that ‘belonged’ to Aberdeenshire and had languished in a barn near London for 30 years.

Research confirmed that this particular Sentinel was the one for us. It was built at Polmadie, Glasgow in 1914, works No 753, and registered by the firm V 3507. It was new to Sandy Runcie, a carrier in Inverurie who published a photograph of his new Sentinel as a Christmas card that year. Changing hands twice in the county, it worked finally as part of the McIntosh of Forgue fleet as late as 1942; spanning two world wars. It transpired that we had found the world’s oldest known surviving complete Sentinel and the sole surviving Scottish built example with a strong local provenance and wonderful local stories to tell.

A price of £40,000 was agreed and we began a fundraising appeal. The perfect fit to our Collecting Policy and encouragement to proceed from Glasgow Transport Museum oiled the wheels and both the Heritage Lottery Fund and NFA responded positively to our appeal for help. After a few short weeks the Sentinel joined the bottle car and my sense of déjà vu went critical. The only real problem in applying for funds was explaining that ‘waggon’ was not a mis-spelling. It was how Sentinel described their products!